The old Lighthouse was taken down. I’ll get some pics of the new one, it’s not very interesting though.

The old light atop the house was about 2′ in diameter and it would rotate around on bearings. I knew of some who would go up the long stairway to ride it it as it turned. The door was always open, yet never was there evidence of vandalism. I haven’t gone down for pics of the new one. What’s the point? Maybe just to see what the area looks like now. In the early 70s it was nice near the lighthouse though to the east the area had been used as a place to dispose of old metal parts of machinery. It has since been cleaned up.

Fire lit up the sky, burning the fields as they were harvested then. Mud littered streets as heavy cane trucks, rattling chains rumbled off the hills laden with sweet cargo. The whistle of the mill called out the new work day, noon, and closing. Singing loud and clear for a hundred years, she called her children, ruling their days… Her voice is now silent though at times I’m certain I hear her whisper. The fires have died. Fences grew where sugar once thrived, denying access to the land we once roamed freely. Interestingly, because it was such a integral and pervasive factor in daily life, no one complained about the mud from cane trucks, smoke, soot and 2 – 3″ pieces of burnt, drifting cane which surfed the Ka Makani O Kohala at harvest time. It was a simpler time. The land was life. Sugar was King.

Navigational aids in the United States are operated by the U.S. Coast Guard, and the lights in Hawai’i are maintained by the Fourteenth Coast Guard District based in Honolulu. Ownership (and sometimes operation) of historic lighthouses has been transferred to local authorities and preservation organizations in many cases. 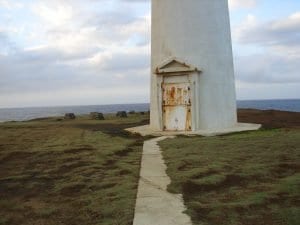 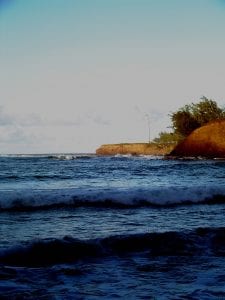 Significance: The Kauhola Point Light House is associated with the history and development of navigational aids in Hawaii. It is a good example of a light house in Hawaii, being one of nine major light houses constructed in the islands between 1909 and 1933. It reflects its period of construction and Pacific location in its use of materials, method of construction, craftsmanship, and design.

On the lighthouse property are the remains of several other structures. A concrete sidewalk runs south east from the lighthouse to the ruins of two former structures. The northernmost is the foundation to a former gasoline storage house. This rectangular reinforced concrete pit measures 15’x7′-9″. It is 5′ deep and contains a pair of reinforced concrete saddles that are 57″ wide and approximately 48″ high and 6″ thick. These saddles once supported an 854 gallon, iron gasoline tank as is evidenced by the semi circular cut in their surfaces, which is approximately 39″ across and 18″ deep. No evidence remains of the tank or the corrugated asphalt structure which protected it. The gasoline was used to power a generator that was in the ground floor of the lighthouse, for use in the event the commercial power source failed. A second structure is the ruins of the former oil house, built in 1914, which in the post-World War II years functioned as a paint locker. The footprint of the oil house measures 7’x9′.  This ruin has reinforced concrete and rubble walls which at their highest stand their original 7′ tall; however, only portions of the east and south walls remain standing. There is no roof or evidence of its wood framing extant. A sidewalk leads from the main concrete walkway to a 46″ opening in the west side of the foundation. A1949 Coast Guard inspection report indicated this structure was at that point in poor to fair condition. Also on the property, to the northwest of the light house are two sets of four battered concrete piers laid out in a square. The southernmost set’s piers are spaced 14′ on center and each pier measures15″square on the top and 18″at the base and are approximately 8″ high. The second set’s piers are spaced 13′ on center and measure 24″ square at the top and 36″ at the base. These piers areapproximately12″high. These sets of piers are believed to have supported the original wood frame lighthouse and a service shed. In 1947 an observation tower was constructed on the former lighthouse piers. This most likely was removed after 1951 when the station was converted to an unattended station.