We would not be where we are today without the support & dedication of a few integral partnerships. Thank you Kohala for your support.

The effort to build Roots Skatepark has been going for five years. It began with an aunty listening to what the keiki said they wanted and then finding the right person to get it going. Mark & Sarah Kobayashi were handed the baton in 2005. They had a small group of youth around them from the church Mark was pasturing at the time. Land was donated for the skatepark from EW Mooney through Surety Kohala and the community came out to help clear where our outdoor basketball court now stands. The skatepark effort was then given the land across the road from Kohala Intergenerational Center. You can imagine this took some time. By January 2007 Richey Riggs & Brian Sandlin had begun their own separate efforts (unaware it was already happening) reaching out to others to build a skatepark in North Kohala. They met at the groundbreaking for Roots Skatepark.

Many meetings, a passing of the baton due to too many other responsibilities on Mark’s plate and the formation of Roots Skate Committee were on their way. We found out about North Kohala Community Resource Center and signed up for their Grant Writing Workshop. The Resource Center said that they believed in the project and took us on as one of their many projects. We would not have developed our Master Proposal without Executive Director Christine Richardson. During this time we met Margret Horwatt (Youth Horizons) the woman behind Waimea Skatepark effort. She has been a wealth of knowledge and support. We learned that we needed to create our own 501 c3 to build the park. Margret helped us tremendously walking us through this process and her non-profit covered us for the transfer of the land that needed to happen before our receiving a non-profit status designated to Roots Advocates for Youth.

We have had fundraisers, met Lani Bowman and her two boys Rico & Jonathon who have dedicated many tireless hours of support and guidance. Our non-profit, Roots Advocates for Youth, has been granted by The Tony Hawk Foundation $10,000 and The Atherton Family Foundation $15,000 to help build Roots Skatepark. We also received a $2,000 grant from Healing Our Island to create a youth oriented and drug free fundraising atmosphere and the Kohala Lions Club granted $1,000 to support the civic-minded efforts of Roots Advocates for Youth to provide an exceptional and safe skateboarding facility.

Roots Advocates for Youth have completed the first 3,000 square feet of skateboarding terrain and is now open to the public for recreation. Roots Advocates for Youth is now seeking your support of funding, donations of professional services, building materials and heavy earth moving equipment to complete the remaining phases of construction. The skatepark and a permanent covered structure will implement the learning activities and programs for encouraging mentorship to all members of the community. 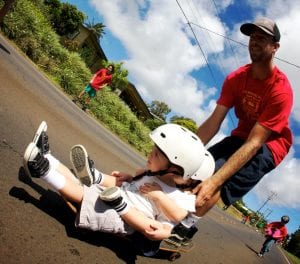